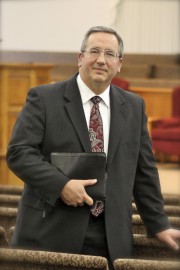 Pastor Sullivant has assisted in the starting of eleven churches, but the need to train young men became a great concern to him in 1995, when he and the members of Pembina Valley Baptist Church determined to start Canadian Baptist Bible College. God has greatly blessed.

His burden for reaching the lost and the need of a local church-based missions ministry, resulted in the starting of CanAmera Baptist Missions International. For each of these ministries and each program, the foundation has always been the Word of God. 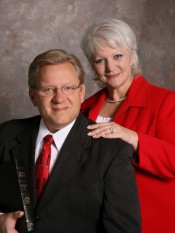 Part of their ministry is to travel to as many local churches as possible to make them aware of those yet unreached people groups and enlist their prayer and financial support to translate and publish Bibles for those who have never had a Bible in their language, train nationals, and plant churches in those areas where there are none.  God allows us the blessed privilege of presenting the work of FirstBible International in a different local church most every Sunday.  And now we are so excited that the ministry has expanded into Canada.  We look forward to the opportunity of presenting the ministry of FirstBible International Canada/The Everlasting Word International Ministry to your church.

Jim and Ruth Price are called of God to translate the Bible into the language of people groups who do not yet have a reliable and readable copy of God’s Word.

Brother Price was saved when he was twenty-three years old. He was not raised in a Christian family, but he heard the Gospel a number of different times, through many believers. He finally submitted to the Lord and was saved in 1983. In 1986, at a missions conference in Cold Lake, Alberta, he surrendered to the call of God for full time service.

Ruth was raised in a Christian home, and was saved at the age of five. She grew up in an atmosphere of serving others in many ways, from entertaining the many visitors who came to their home to singing with her family in retirement homes and on native reserves.

Brother Price and Ruth were married in 1990 and have been married for almost thirty-one years. They have seven children, ages seventeen to twenty-nine, and have nine grandchildren, ages six and under.

Brother Price has a Bachelor of Theology degree from Bible Baptist College in Simcoe, Ontario, as well as a Master of Arts degree from Indiana Baptist Seminary, Greenwood, Indiana. He pastored Vision Baptist Church in Leduc, Alberta for twenty-five years and was heavily involved in the Bearing Precious Seed ministry before the Lord called Brother Price and his wife to embark upon a new chapter in their lives with firstBible International in January of this year (2021). They are excited about what God has for them and ask that you please pray for them as they seek to be “advocates for the unreached”.