The Nepalese (also known as the Eastern Pahari) are the major ethnic group in Nepal. They have many racial, cultural, and linguistic similarities to the people of northern India. Their domestic and religious practices are also patterned after the higher Hindu castes of India.

Most of the Nepalese live in small villages in hilly terrain and are accustomed to traveling long distances on foot.

They are known for their cheerfulness, good humor, resourcefulness, and self-confidence. Their population consists primarily of three "castes," or social classes: the Brahmans (priests and scholars); the Kshatriyas (rulers and warriors); and the Achut (laborers and servants). The Achut perform the most polluting tasks such as cleaning bathrooms. Many also beg and scavenge for a living. As "untouchables," they are excluded from and considered ritually unclean by the other classes of Hindus.

Nepal is a small mountainous Kingdom lying at the foot of the Himalayan Mountains. It is home to approximately 110 ethnic groups who speak many different languages and dialects, and have many religous beliefs and practices. Nepal is the world's only Hindu Kingdom, Hinduism being the state religion. Since 1991, there has been freedom for all to profess and practice their religion, but not to proselytize. However, persecution of believers still occurs and will probably continue as long as the church continues its rapid growth. The increase in tourism is providing an excellent opportunity for Christians to visit this remote land and minister the Gospel of Jesus to these needy peoples.

Most of the Nepalese are farmers. They live in small rural settlements that are situated near rivers or springs. The villages consist of loosely grouped homes surrounded by farm land. Only the poorest families do not own land. In middle and southern Nepal, the land has been terraced for generations. Wet rice is grown during the monsoon season; whereas dry rice, maize, millet, and wheat are raised on drier land during the summer and winter months. The Nepalese also cultivate vegetable gardens to feed their families. Most of the farmers raise buffalo and goats for meat, and cows for milk.

Nepal is a Hindu kingdom in which the king is worshipped as an incarnation of the Hindu god, Vishnu ("protector and preserver of worlds"). Although most of the Nepalese are Hindus, there are also a large number of Buddhists and Muslims. All of these groups have held on to their traditional animistic beliefs (belief that non-human objects have spirits).

Only 1% of the Nepalese in Nepal know Jesus. Prayer is the key to reaching them with the Gospel. 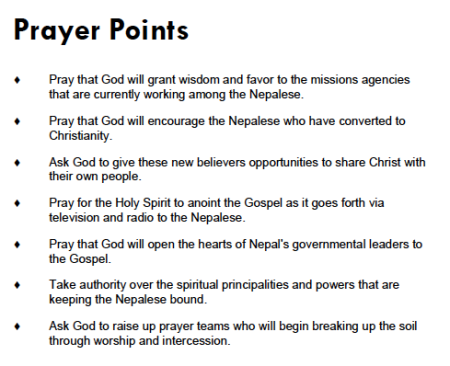